Anne de Baetzelier steped into the spotlight for the very first time after being elected Miss Belgium 1989. That same year she started working as a TV announcer with the Flemish comercial TV network VTM. She presented more than 15 popular TV shows and went on to host Tien om te Zien, the music program with the highest ever ratings in Belgium, in 1992.

She cooperated with many national and international stars. On top of her TV work and thanks to her elegant presentation style, Anne has become a much sought-after host for events renowned companies, both in Belgium and abroad wish to stage.

Anne de Baetzelier possesses a Foreign Language University Degree. Companies such as, Bayer, Samsonite, Nike , Coca-Cola, Microsoft and many others frequently ask her to host their international events: congresses, seminars, dealer meetings, award ceremonies or product launches. On top of Dutch, her mother tongue, Anne is also fluent in French, English and Spanish. Her stage present, her stylish radiance and multilingualism make her one of the most popular international presenters for the most prestigious events.

The Art of Presenting combines several aspects. Interviewees should feel comfortable and the involvement of the audience is to a considerable extent determined by the commitmment of its host. Since the host represents the company or the organizer, it is vital that she also portrays the organizer´s image to the audience at that particular moment in time. But above all, the message the host conveys should be simple and intelligible.

Anne de Baetzelier is a famous for her communicative insight and her talent to present complicated matters in a simple way. Her true interest in the company and its products she presents, as well as her profound preparation are the most important ingredients of her success.

Add to favorites
Do you want to book Anne de Baetzelier as speaker? Go

Anne was really brilliant. We really loved her and she looked amazing but most importantly she was so professional and handled it like a dream. 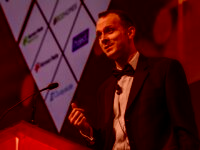