As Commercial Director of Virgin Galactic, it’s Stephen’s role to make one of the most ambitious, innovative projects in business history in to a commercially viable one. Recruited by Richard Branson from the City, Stephen leads sales, business development, marketing, PR, customer relations and licensing and commercial partnerships.

Stephen Attenborough is at the forefront of space tourism. He is the Commercial Director for Virgin Galactic, a company wholly owned by Sir Richard Branson’s Virgin Group which is on track to become the world’s first passenger carrying commercial spaceline. Stephen Attenborough joined Virgin Galactic as the company’s first full time employee in 2004 he now leads a team in London that covers sales, marketing, customer care, PR and communications for the space tourism business which has attracted over 380 future astronauts and more than $50m in deposits.

He also is responsible for workstreams that are investigating the non tourism applications for the new space vehicles, particularly science research. During 2009 and 2010 he was a part of the deal team which secured Virgin Galactic’s first external equity partnership with a sale of 32% of the company to Abu Dhabi’s AABAR Investments PJSC for $280m, valuing Virgin Galactic at around $900m. Stephen joined Virgin Galactic having escaped a career in investmentmanagement in the City of London.

Prior to joining Virgin Galactic, Stephen Attenborough worked for Gartmore Investment Management, a major London-based investment management firm, where he performed a number of management and senior management activities for more than 15 years. At Gartmore, his roles focused on the company’s relationship with sophisticated institutional and high net worth clients and prospective clients.

Stephen Attenborough explains to audiences the impact new technologies have on businesses and focuses on how to drive business innovation and growth through the right combination of innovative people and technology. Stephen also entertains his audiences with the enthralling Virgin Galactic Story. Immensely entertaining and highly enjoyable, Stephen’s presentations are a perfect mix of new ideas and sound business know-how.

Add to favorites
Do you want to book Stephen Attenborough as speaker? Go 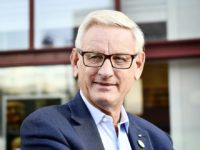