Prior to 1999, the only two India-born Indians to be awarded the Nobel Prize were RabindranathTagore (in 1913) and CV Raman (in 1930). In October 1998 the Swedish Royal Academy of Sciences selected Amartya Sen for the 1998 Nobel Prize in Economic Sciences. The sixth Indian to be awarded the Nobel Prize was honoured for a life-time’s work to invest the dismal science with concerns that are far from the mundane. e was also awarded the inaugural Charleston-EFG John Maynard Keynes Prize in recognition of his work on welfare economics in February 2015 during a reception at the Royal Academy in the UK

Social choice, poverty index, studies of famine – Amartya Sen’s interests are abstruse in comparison with the market-orientated research of the past few laureates.  These are undoubtedly lively areas of research, but light years away from Sen’s world of measuring poverty and inequality by the most rigorous scales and probing the reasons of the individual’s economic failure.

Graduating in 1953, Amartya Sen was the Lamont Professor of both economics and philosophy at Harvard University for over a decade; he had secured his place in the high table of “liberal” America. Amartya Sen has made contributions to welfare economics, social choice theory, economic and social justice, economic theories of famines, and indexes of the measure of well-being of citizens of developing countries.

In 1996, Amartya Sen became the first non-American president of the American Economic Association and his reputation was no less on the other side of the Atlantic. Throughout the 1970’s and most of the 1980’s he was in the best faculties, including the London School of Economics and Oxford.

In January 98, Amartya Sen returned to his alma mater to become Master of Trinity College, Cambridge, a coveted post never before held by a non-white, or even a non-Brit.  It made Sen a truly international celebrity.

Add to favorites
Do you want to book Amartya Sen as speaker? Go

The identity of an individual is essentially a function of her choices, rather than the discovery of an immutable attribute. 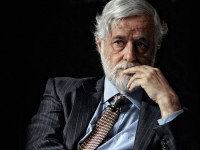 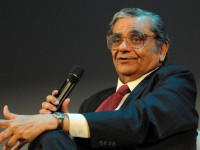 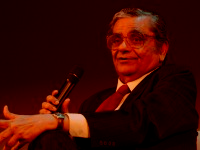