Fernando Savater, winner of the Planeta Prize in 2008 for his novel “The Brotherhood of Good Luck” is one of the most renowned philosophers and writers on the Spanish scene.

Born in San Sebastian in 1947, Fernando Savater studied philosophy and literature in Madrid, where he began his career as an assistant professor at the “Universidad Autónoma”. In 1975 obtained his PhD with a thesis on Nietzsche and soon rejoined the teaching at the Chair of Ethics at the University of the Basque Country. Since 1995 teaches philosophy at the “Universidad Complutense de Madrid”.

Fernando Savater described himself “more as a professor of philosophy than as a philosopher” and has written over 45 works, including essays, novels and children′s books. His philosophical thought together in a philosophical dictionary, is part of a reflexive rebellion, not without humor and irony, anti-establishment. Ethicist, a discipline he calls “the conviction that not everything is equally, there are reasons to prefer one type of activity to another” is reflected in his books, among others, “La tarea del héroe”, “Invitación a la ética”, “Como amor propio” and “Ética para Amador”.

In 1997 he published “El valor de educar”, essay dedicated to his mother, his first teacher, which advocates education as a remedy for most ills of our society, “intolerance, fundamentalism and radical nationalism must be tackled through school -he says-“. In January 2001, he compiled numerous articles against radical nationalism, published in El Pais and El Correo (newspapers) in the book “Perdonen las molestias”.

In addition to the Sakharov Prize for human rights advocacy, which received in December 2000 on behalf of the Civic Platform “Basta Ya”, which is a spokesperson, has received among others: Premio Nacional de Ensayo (1982) Premio Anagrama, Premio Ortega y Gasset for Journalism (2000) and Premio Fernando Abril Martorell for “his defense and spread of freedom, tolerance and human rights.”

He has been awarded many Honoris Causa by universities in Spain, Europe and America, as well as diverse medals. Deeply involved in fighting against terrorism and in the defence of liberties threatened by ETA in the Basque Country, Fernando Savater is a member of the Civic Platform Basta Ya and currently of the new party Unión Progreso y Democracia.

Fernando Savater is definitely a great speaker, a clear example of civil and human rights being, definitely moving presentations, very informative and revealing.

Add to favorites
Do you want to book Fernando Savater as speaker? Go 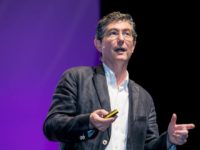