Gary Lineker is a former professional footballer and popular sports TV Pundit, he is also recognised as the face of the Walkers Crips advertisements. Gary is a charming and entertaining awards host and after dinner speaker, suitable for various corporate events.

Gary began his professional football career playing for Leicester City; he then went onto play for Everton and more notably Barcelona where he scored 21 goals in the space of 42 games. After Barcelona, Gary went on to play for Tottenham Hotspurs and ended his career at Nagoya Grampus Eight in Japan. In the 1986 World Cup, Gary was the top scorer of the whole tournament and he won the ‘Golden Boot’, he is the only English player to have done so.

Gary Lineker retired from international football with 80 caps and 48 goals to his name; he decided to pursue a career in media.  Gary’s media career began on Radio 5 as a football pundit and he was then hired by the BBC to take over Des Lynam as the BBC’s main football presenter, he presented ‘Match of the Day’ and ‘They Think It’s All Over’. Gary is also an avid Golfer and has a handicap of four, he began presenting gold for the BBC when Steve Rider left and has covered both The Masters and the Open Championship.

His media career has gone from strength to strength and he now works for the NBC Sports Network, covering Premier League Football  and he also presents some of the coverage for the US version of ‘Match of the Day’. He has also appeared in non sport related shows such as ‘Hell’s Kitchen’, ‘Ant and Dec’s Christmas Show’ and ‘Friday Night with Jonathan Ross’.

GaryLineker can also be recognised for his roles in the Walkers crisps adverts, which he was started doing in 1995. He plays the bad guy in a series of humorous adverts for the famous crisp company and for a short while their salt and vinegar flavoured crisps were named ‘Salt-n-Lineker’.

Gary Lineker is a talented awards host and after dinner speaker, his humour and charisma never fails to impress audiences and he keeps the crowds entertained  at corporate events.

Add to favorites
Do you want to book Gary Lineker as speaker? Go 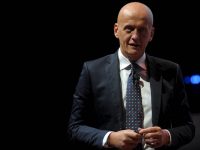