For years, Marco Tempest’s masterful blend of digital media and magic has enabled audiences to glimpse the future before technology gets there.

Adventurer, Scientist, Showman, Dreamer and Hero… There’s no one quite like Marco Tempest. His imaginative combination of computer generated imagery, video, music and stagecraft with his unique vision of future life is creatively unique and unequalled within the performing arts. No one else combines the incredible technical savvy with the showmanship, the physical skills and the charisma of Tempest. With all that talent, it’s amazing that he seems to enjoy poking fun at himself, and all those marvelous toys! Marco gets a kick out of bending reality around the edges. Is that image in the screen, or just in front of it?

At age 22, Marco Tempest captured the prestigious New York World Cup of Magic, launching him into international prominence. Marco Tempest has been featured in his own theatrical shows and as part of numerous television specials which have enjoyed well in excess of 500 million viewings across the world. Marco’s award winning television series The Virtual Magician is currently airing in over 40 countries. His talent has been recognized with a number of prestigious international awards. Marco Tempest was also the winner of the 2009 World Magic Award for “Best Contemporary Magic”

In the business world, many of the world’s leaders in the high-tech industries have found Marco’s work to be the perfect way to present their newest products and innovations – to their own staff members and to the public at large. Such giants as Panasonic, Sony, Apple, and Lucent Technologies have used his services time and time again.

Internet giant America On Line (AOL) used Marco to introduce their newest browser to the European market at Europe’s largest high-tech trade show. In the automotive industry, Marco has used his next-generation illusion technologies to present the hottest new cars for Audi, Nissan, Toyota and Mitsubishi, to name a few, at events ranging from private party product launches for local dealers to some of the largest auto shows in the world.

Marco Tempest’s ability to take living human beings into any kind of virtual space imaginable, including inside the human body, has made him a favorite with many leaders in the healthcare and pharmaceutical industry, including Johnson & Johnson, Parke-Davis, Pfizer, Searle and Alza Corporation.

Marco Tempest has been invited as a visionary presenter to the Seoul Digital Forum and the TEDxTokyo conference and presented his keynote to the xDays Leadership Conference in Switzerland. His work is constantly changing: as new technologies evolve, Marco Tempest finds captivating ways of turning those advances into compelling illusions. Ever growing, ever exploring, ever developing – with Marco, it’s always wise to expect the unexpected. You won’t be able to guess where he’s going next, but you can bet it will be filled with innovation, wonder and excitement!

Add to favorites
Do you want to book Marco Tempest as speaker? Go

I don’t know what magic will be like in 50 years, but I suspect that it will look a lot like Marco Tempest. 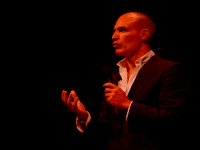