In 2007, the European Commission appointed Ricardo Diniz as European Ambassador to the Oceans.

Ricardo Diniz was born in Lisbon, Portugal. At the age of 5 he moved to London with is father, which was to change the course of his life. Showing a deep passion for the oceans from a very early age, Ricardo was inspired to become a solo sailor when he saw a special sailing boat that had been sailed around the world in the 1960’s with just one man onboard.

With the curiosity of a child, Ricardo wanted to know everything about that man and his sailboat. He told his father that “One day I’ll sail the world by myself!” To this day, Ricardo Diniz has sailed the equivalent of nearly four times around the world, with more than 100,000 miles logged.

Ricardo Diniz has carried out numerous Expeditions to promote Portugal around the world. To mention a few, he sailed from Lisbon to Dakar, at the same time as the famous rally to confirm the importance of renewable energy, he took a bottle of Port Wine to Queen Elizabeth II, for her 80thbirthday and to celebrate the oldest alliance in history. He sailed around the vast Portuguese maritime region, non-stop for 24 days, to reenforce the potential of Portugals ocean, he sailed from Portugal to Brazil, in a tribute to the Portuguese National Soccer Team, present in the World Cup, to whom he offered a Portuguese Flag and a cork bottle, full of messages of support from Portuguese around the world. All these trips were always solo.

Ricardo Diniz is also a speaker in fascinating talks about overcoming challenges in life, teamwork, sales, strategy and marketing. Expressing himself in Portuguese or English depending on the profile of his audience, he has been invited to lectures in schools, universities and companies in all over Europe, Brazil, Hungary, the United States, Vietnam and Japan.

His commitment, dedication and professionalism are recognised by all who meet him. It is no coincidence, therefore, that he is considered one of the most brilliant speakers out there.

Add to favorites
Do you want to book Ricardo Diniz as speaker? Go

Thousands of people from around the world are inspired by Ricardo's life, travel, projects and lectures. 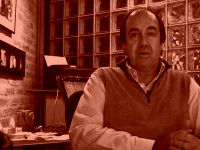