Ángel Cabrera is the President of Georgia Institute of Technology, a top-10 public research university in the U.S., Georgia Tech has outstanding programs in business, computing, design, engineering, liberal arts, and the sciences. With 35,000 students and 167,000 living alumni who work in business, industry, and government throughout the world, Georgia Tech has become internationally recognized for the quality of its educational and research programs.

Also, Ángel Cabrera was President of George Mason University the largest and fastest-growing public university in Virginia. Under his leadership, the university accounted for more than half of all enrollment growth in Virginia, increased student outcomes, and joined the top tier of research universities in the Carnegie Classification. In 2018, it was named by Forbes as one of America’s best midsize employers.

Previously, Ángel Cabrera was the first foreign President and CEO of Thunderbird since its founding in 1946. This business school is considered a pioneer and leader in the world of international business training, and in it Ángel Cabrera carried out a profound restructuring and established new programs for managers worldwide.

In addition, Ángel Cabrera was Dean of the IE Business School, from 2000 to 2004, a stage in which he recruited more than 25 teachers from around the world and doubled the number of international students, making it one of the five main business schools of Europe.

As a business educator, Ángel Cabrera has played a key role in advancing professional ethics, internationalization and corporate social responsibility. As principal advisor to the United Nations Global Compact, in 2007 he was the lead author of the “Principles for Responsible Management Education”, now adopted by more than 700 schools around the world.

His works have been published in some of the most prestigious journals in the sector and he has been named “Global Leader of the Future” by the World Economic Forum, and in 2004 the Business Week magazine named him as one of the “25 stars of Europe”.

He also belongs to organizations such as the Future Trends Forum in Madrid and is an advisor to the United Nations in the field of Corporate Social Responsibility.

Experienced educator, manager and communicator, we are facing one of the most demanded speakers at international level, Ángel Cabrera talks about global leadership, management training and social responsibility of business leaders. It is also considered a promoter of education, business ethics and the concept of “global corporate citizenship.”

Add to favorites
Do you want to book Ángel Cabrera as speaker? Go 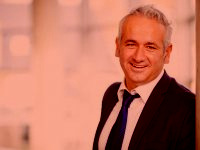