Bruno Giussani is a curator of ideas. He is the European director of TED, the nonprofit organization behind the TED, TEDGlobal (which he curates) and TEDActive annual conferences and the popular online TEDTalks. Bruno Giussani is a member of TED’s senior team and curates and hosts TEDGlobal, TED University and various TED Salons and special events.

Through its conferences, TEDtalks available on TED.com for free (and subtitled in over 100 languages), the TEDPrize, the TED Fellowship, hundreds of local independently-organized events under the label TEDx, TED Conversations, TEDBooks, TED-Ed and more, TED focuses on “Ideas Worth Spreading.” Bruno Giussani joined TED in 2005, and produced the first TEDGlobal that year.

Besides his role with TED, since 2005 he also curates and hosts the annual Forum des 100, which is considered among the leading conferences on politics an the economy in Switzerland. Bruno Giussani  is a Senior Advisor to the Atlantic Council in Washington, DC, and a member of the Boards of Tinext, a Swiss software firm he co-founded, and of the Knight Fellowships at Stanford University. He also advises IndieVoices, a crowdfunding site specializing in helping independent media, primarily in the emerging world, raise the funds they need, and Canal+ Kindia2015 project. Bruno Giussani is a member of the jury of Bloomberg Philanthropies’ Mayors Challenge 2014. Through his firm Giussani Group LLC he advises public organizations such as the ICRC as well as private companies, is an author and a frequent public speaker. In 2011, 2012 and 2014 Wired UK selected him as one of the “Wired 100”. In Spring 2013 he was selected as one of Good Magazine’s “GOOD 100”.

Prior to joining TED, Bruno Giussani was a well-known writer and commentator. For several years he edited the political section of Swiss news magazine L’Hebdo, before becoming its US correspondent and, later, its technology columnist and editor of the first Swiss online news web site, Webdo, launched in 1995. His writings have been published in newspapers, magazines and websites in Europe and the United States, including the New York Times (for which he wrote the Eurobytes column from 1996 to 2000), the Wall Street Journal Europe, the European editions of Wired magazine (UK and Italia), The Economist, Business Week, The International Herald Tribune, the Neue Zurcher Zeitung (Switzerland), L’Hebdo (Switzerland), Liberation (France), Il Sole-24Ore (Italy), The Huffington Post, and more. Bruno Giussani was also the European editor of the now-defunct Industry Standard magazine and one of the founding editors of its European version, and the producer of the magazine’s Global Internet Summit (Barcelona, 2000). His former blog, LunchOverIP, which he wrote from 2005 to 2008 (still available online as an archive) won him a national Swiss award in 2006, while his articles on technology and innovation in L’Hebdo were awarded in 1995 the Swiss prize for technology journalism.

Bruno Giussani has authored or co-authored several books, favoring a pragmatic, no-hype approach. A reviewer in The International Herald Tribune wrote that in his book “Roam. Making Sense of the Wireless Internet” (Random House, 2001 and 2002; Chinese edition, Citic, 2002; Italian edition, Fazi Editore, 2002) he “first bursts the bubble of mobile hype and then explains why wireless communications really matters and how it works.”

From 1998 to 2000 Bruno Giussani was Head of Online Strategy at the World Economic Forum. He has also been instrumental in launching and helping develop the LIFT conference (of which he was Vice-Chairman), the global Sandbox Network and the Postcode Lottery Green Challenge and was an adviser to the DLD conference, the Brain Forum and the Bloomberg New Energy Finance Summit among other ideas-sharing initiatives.

Bruno Giussani has co-founded two Internet companies: Tinet, in 1995, the first Internet service provider in the Italian-speaking part of Switzerland (then sold to Swissonline/Cablecom), and Tinext, in 2000, a software firm with offices in Switzerland and Italy, of which he is Vice-Chairman. He was the Director of Innovation of the short-lived startup 3GMobile, an attempt to launch a new mobile telecom operator in Switzerland. From 2002 to 2008 he was a member of the Board of Namics, the largest Swiss Internet consultancy.

Add to favorites
Do you want to book Bruno Giussani as speaker? Go

The man behind some of the conferences most relevant that provides Internet does not intend to change the world. But he is doing it. 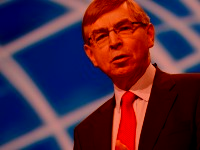