Brett King is a futurist, an Amazon bestselling author, an award winning speaker, hosts a globally recognized radio show, is the Founder and Executive Chairman of neo-bank Moven. He advised the Obama administration on the Future of Banking, and has spoken on the future in 50 countries in just the last 3 years.

Brett King is a world-renowned futurist and speaker, an International Bestselling Author, and a media personality who covers the future of business, technology, and society. Brett King is the bestselling author of the groundbreaking book «Augmented: Life in The Smart Lane» in which he discusses how new technology will affect the future and what to make of artificial intelligence or health technology. President Xi Jinping cited his book Augmented on the topic of Artificial Intelligence and he was voted Top Foreign Author for 2019  in Russia. Augmented: Life in the Smart Lane was an international bestseller, top 10 in North America and China, and the book remained in the top-10 on Amazon for 2 years. «Bank 4.0», which followed, spent 2 years on the Amazon bestsellers list for Banking books.

He has spoken in over 50 countries, at TED conferences, given opening keynotes for Wired, Techsauce, Singularity University, Web Summit, The Economist, IBM’s World of Watson, CES, SIBOS and many more. He has appeared as a commentator on CNN, CNBC, BBC, ABC, Fox, and Bloomberg. He previously advised the Obama administration on Fintech policy and advises regulators and bank boards around the world on technology transformation.

King hosts the world’s first and #1 ranked radio show on FinTech called “Breaking Banks” (180 countries, 7m million listeners). He is the Founder and Executive Chairman of Moven, a successful mobile start-up, which has raised over US$47 million to date, with the world’s first mobile, downloadable bank account, available in the United States, Canada, UK, Indonesia, Russia, Tanzania, Brazil, Saudi Arabia, and New Zealand.

Named ”King of the Disruptors” by Banking Exchange magazine and the “Godfather of Fintech” by The Australian newspaper, King was voted American Banker’s Innovator of the Year, voted the world’s #1 Financial Services Influencer by The Financial Brand and was nominated by Bank Innovation as one of the top 10 “coolest brands in banking”.

Brett King is the speaker for you, if you’re wondering what the future of business or banking industry will look like, and how technology is affecting the future. When Brett is hired for an event, he delivers a fully interactive experience. He will definitely deliver the content on stage, but he will also interact with attendees, answering questions and fully immersing himself at the event.

Add to favorites
Do you want to book Brett King as speaker? Go

Brett delivered extraordinary insights to Google’s clients and partners in his BIG SHIFT presentation. At Google we are used to some big ideas and even bigger names, but Brett delivered a unique view that was truly surprising...


"We truly appreciate your insights about the bank and customers of today and the future...their changing behaviour and lifestyles, their attitudes towards new technologies, and their role in changing the future of financial services. It was indeed an honour and a rare privilege to have you as our guest speaker."
BANCNET

"Brett, you were an absolute pleasure to work with! I cannot fault your professionalism. I have received constant compliments about your presentation, and would be delighted to work with you again. It is rare to find a speaker that can both command a stage and work one on one so successfully! "
Cards & Payments 2013

"Everyone that attended walked away with lots to think about and a new direction on which to focus. We would highly recommend scheduling Brett to speak at your next function!"
CEO at Coors Credit Union 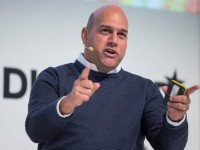