Romano Prodi is an Italian economist and politician who was Prime Minister of Italy between May 1996 and October 1998 and subsequently held the post of President of the European Commission until 2004. He has been the Chairman of the Council of Ministers of Italy since 2006.

His political career began in 1978, when he became Minister of Industry and later in 1982, Romano Prodi was appointed by Giovanni Spadolini as President of the Public Holding Company IRI (Istituto per la Ricostruzione Industriale). In 1996, he went to the head of the coalition “El Olivo” in the general elections of Italy and after the electoral victory of the group, was elected Prime Minister. The performance of the Romano Prodi government was focused on the reorganization of the Italian economy in order to solve the major economic crisis and achieve the entrance of Italy into the European single currency project.

His long experience as a politician and economist, enabled him to become one of the most recognized experts in Europe to treat some of the more topical issues such as the economic crisis or the use of renewable energy.

Add to favorites
Do you want to book Romano Prodi as speaker? Go

Democracies must have equilibrium... and the entanglement of politics and information must be minimized. 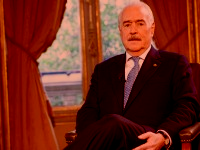