His coverage of breaking news which has spanned two decades, has seen him report on a range of stories from the death of Yasser Arafat, the Lockerbie Pan AM 103 crash to the death of Michael Jackson.

Richard Quest is CNN’s leading international business correspondent and presenter of Quest Means Business. «Quest Means Business» redefines the myth that business is boring, bridging the gap between hard economics and entertaining television. CEOs and Prime Ministers make a point of appearing on Quest Means Business. In addition to anchoring the five-times-weekly business programme, Quest hosts the monthly programme CNN Business Traveller and CNN Marketplace. He formerly anchored the monthly show Quest and the daily show CNN Today which was geared towards morning audiences in Europe.

Quest’s dynamic and distinctive style has made him a unique figure in the field of business broadcasting. He has regularly reported from the G20 meetings and attends the World Economic Forum in Davos Switzerland each year. He has covered every major stock market and financial crisis since Black Monday in 1987 and has reported from key financial centres globally including Wall Street, London, Sao Paulo, Tokyo and Hong Kong.

He is also the established airline and aviation correspondent at CNN and currently presents the monthly CNN Business Traveller show, the definitive authority on making the most of doing business on the road – moving from A to B on company time. As a business travel specialist he has become a voice of authority on subjects like the launch of the Airbus A380.

His coverage of breaking news has spanned decades and has sent him to the hot spots all over the world. Recognised as one of the most renowned journalists, his interview guests  are personalities from politics, business and society.

Prior to joining CNN he worked at the BBC where he was the North American business correspondent based on Wall Street for 12 years. Richard is British holds a LLB (Hons) degree in Law from Leeds University and was called to the Bar.

He is a brilliant speaker on business and management issues, full of energy, humour and insights as well as a world class facilitator.

Add to favorites
Do you want to book Richard Quest as speaker? Go 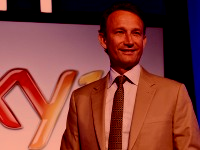