Angela Ahrendts was the recent Senior Vice President of Retail and Online Stores at Apple, a role she took up in 2014. The gadget giant created the role for her; she’s the first woman on Apple executive team and has been the highest-paid executive, earning almost double of what CEO Tim Cook makes. She was previously CEO of Burberry Group. During her tenure here, the company value rose from £2 billion to over £7 billion.

She began her career with major New York brands as an executive for: DKNY (1989-96), Henri Bendel (1996-98) and Liz Claiborne (1998-2005). Across this time she gained a formidable reputation for successfully diversifying and expanding brands whilst growing theirreputation internationally.

Since joining Burberry Group in 2006 she has deployed her trademark vigour to revitalise the ailing British giant. During her seven year tenure she has successfully doubled sales and turned Burberry around to generate annual revenues of over £1.8 billion. Her rapid response restructuring during the early days of the financial crisis led Burberry to outperform every other UK company in 2009, and continue to grow to the largest luxury goods maker in the UK and amongst the top five globally.

Also, Angela Ahrendts is a keen advocate of technology and social media, which she has made core to Burberry’s marketing strategy. The company maintains an active Facebook and Twitter accounts with over 15 million fans and 2 million followers respectively. An early teaser for the Spring/Summer 2013 range hit over 1 million views on YouTube in 48 hours.

Angela has oversaw Burberry’s great success in Asian markets, especially Hong Kong and Mainland China, which the company confidently predicts it will grow to £480 million worth of business into late 2013. She was awarded a DBE for her services to British business in 2013.

Currently  Angela Ahrendts is an Independent Director of the Board of Directors of Airbnb, a service that seeks to offer unique experiences through stays anywhere in the world. It combines, therefore, an online, offline aspect and an app that connects guests with host and company.

In her lectures, the businesswoman tells how she got to Apple and gives some recommendations to young entrepreneurs. “You have to start somewhere, no matter if you are a great chef or a great musician, nobody fills a stadium from one day to the next, you have to work hard to get it.”

Add to favorites
Do you want to book Angela Ahrendts as speaker? Go 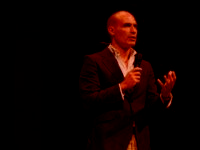