“Improvisation is empowering because it welcomes the unknown.”

Philippe Petit, universal poet laureate of the high wire, was born in France and took his first steps on the wire at age 16. He learned everything by himself while being expelled from five different schools. Performing on five continents, he taught himself Spanish, German, Russian, and English, and developed a keen appreciation for architecture and engineering. Using his wire to extend the boundaries of theater, music, writing, poetry and drawing, he has become an inimitable high wire artist.

On August 7, 1974, Petit overcame seemingly insurmountable challenges to achieve the artistic crime of the century. A daring idea originating from an article about the Twin Towers at the dentist’s office, Philippe Petit walked a high wire illegally stretched between the rooftops of the World Trade Center. Making eight crossings over the course of an hour, a quarter mile above the sidewalks of New York, Petit’s book, To Reach the Clouds (re-titled Man on Wire in paperback), recounts that adventure. His spellbinding act was also the basis of the 2009 Academy Award-wining documentary film, Man on Wire, as well as the 2015 feature film, The Walk, to be directed by Robert Zemeckis and starring Joseph Gordon-Levitt as Petit.

Petit’s latest book, Creativity: The Perfect Crime, is a new manifesto on the creative process from a master of the impossible, revealing new and unconventional ways of going about the artistic endeavor. His other book, Why Knot? How to Tie More than Sixty Ingenious, Useful, Beautiful, Life-Saving, and Secure Knots! was released in April 2013.

In the nearly 40 years since the World Trade Center walk, Petit has performed on the high wire more than 100 times around the world in such locations as Paris, Tokyo, Frankfurt, Jerusalem and New York City where he has been an artist-in-residence at The Cathedral Church of St. John the Divine for more than 30 years.

Philippe Petit is the recipient of the first Action Maverick Award; the New York Historical Society Award; the prestigious James Parks Morton Interfaith Award; and the Byrdcliffe Award. He is a laureate of the Foundation de la Vocation par Marcel Bleustein-Blanchet, and the French Ministry of Culture bestowed upon him the title of Chevalier des Arts & des Lettres. Petit was a featured speaker at the 2012 TED Conference.

Petit’s new high wire project is the Rapa Nui Walk, a walk on an inclined cable set on Easter Island in homage to the Rapa Nui and their giant stone statues known as Moai. Among his most cherished goals is the continuation of his first series of high wire master classes, Tightrope! An Exploration into the Theatre of Balance.

Add to favorites
Do you want to book Philippe Petit as speaker? Go

What a remarkable and inspirational event! I have received and continue to receive an overwhelmingly positive response from our leaders. Philippe's mix of passion, creativity, humor, and authenticity was truly inspirational and just what our leaders needed to experience. In addition, Philippe's generosity of spirit was evident, as he spent time eating lunch with the group, chatting with various leaders, taking pictures, etc. From the time spent after his performance, leaders were able to experience Philippe's authenticity and see that his performance wasn't an act, but rather a way of life. The event was a homerun! I'm so happy we were able to make this happen. 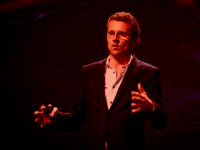 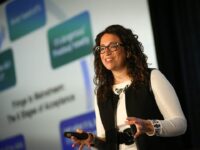